Over July we saw competition numbers fall due to the cold mornings (we think), but this was replaced by green fee players who came to the course in record numbers through the month which was great to see.
(Obviously, they love the cold!)

Congratulations are in order to member John Pantelimon who recorded his 15th hole in one on the course in July, and the 20th in his illustrious career so far (most of us would be happy to have had just the one in a lifetime!)

Did you know that on the website in the golf section/member’s area there is a feedback form should you wish to use it, this is where you can let me or the Board know anything that you feel would improve the Club or just want to let us know your thoughts on any issues.

It is hoped that in the next 6 weeks we will be sending out a survey to get the thoughts of the membership on various items, some of which might or might not be of importance to you, but the feedback and insight gained we hope will better help us pinpoint what the members value most at SPGC, which will, in turn, will also help the direction of the Club into the future.

The proposed extra spaces in the car park is still to go ahead, Bob White who is the lead on this project will let me know when he is ready to proceed, I will keep you all informed of any progress

There have been a number of members who have spoken to me recently about the reinstatement of the major honour boards back into the Clubhouse, I personally have no problem with this and also place a great deal of value on the golfing history of SPGC, and I thank those members for bringing it up and letting me know how important it is to them, I just wanted to let all the members know that I am actively researching how best to achieve this at the moment.

Thank you as always, and I hope to see you around the Clubhouse

The first 3 rounds of timesheets for the Club Championships will be released through the computer on Friday 11th August, 2017. This will let members book for the first 3 rounds. Final round will be a seeded draw.

Final round – Saturday 16th September will be a seeded draw for the top 8 players in each grade in the afternoon field , 1st tee in A,B,C grade3s.

The rest of the players on the timesheet will be placed as close to their original tee times as possible.

Thank you for your cooperation.

NEWS FROM THE CLUB HOUSE

Since the last newsletter we have had 2 working bees.

We completed pruning along the 17th and removed overhanging branches interfering with the boundary fence along Fairway Drive.

Several vines were removed from trees, an endless task, but well worth the effort.

Until next time, enjoy the great weather and play well.

Did you know that according to Genesis 1:20-22, the chicken came before the egg.

NEWS FROM THE PRO SHOP

Less than 1 month until the Club Champs members, so it is time to sharpen up your game. It might be a couple of lessons, a new wedge or that Epic Driver, so let us know if we can help. I love Club Championships time so best of luck to you all and I look forward to seeing some great results.

There has been some great golf shots played of late, including my old mate John Pantelimon who recorded his 20th Ace. Now that’s impressive! Round of the month goes to Col and Jill Baxter who had 50pts to win the mixed 4Ball on July 23rd, by no less than 5 shots.

Thanks to all of those who have been asking about Ali. She is now in the 4th week of her campaign in America. Ali has been playing the USA Pay for Play tours and all her events are PGA sanctioned and attract very strong fields. Her best finish was a 2nd place in the North West Open in Chicago. The next two weeks she has tournaments in Palm Springs before Tour School which is also in Palm Springs. She has prepared very well so let’s hope she can make it through the 3 stages. There will be around 1000 girls for about 40 spots on the Summer Tour.

Well done to our Mens Interclub Pennant teams who have just finished the season. The C-Grade team narrowly missed the Final after a great effort all season.

I would also like to congratulate one of our newest junior members, Yuuki Takada, who just competed in the Queensland Primary Schools State Championships, which was played in Toowoomba. Yuuki finished in third place for the week and she will now represent Queensland in the National Championships in Adeleaide later in the year. Well done Yuuki.

Mid Weed Pennants – some tough matches played on Monday 31 July at Parkwood & Emerald Lakes.  Monday 7 August will be played at Southport and Helensvale.

Foursomes Championships – Thursday 24 August appears as a prepaid event in the Fixtures Book, however it will be pay $15 on the day with bookings online.  An 18 hole foursomes comp has been introduced for those not wishing to play 36 holes.  The 36 hole event will be a shotgun start at 7.45am off both tees.  The 18 hole event will commence at 9am for the usual comp fee.  There will be two separate competitions, and two separate presentations.  Bookings available online.

Committee News – we would ask all ladies to please notify the office of their mobile number for inclusion in the website directory so the committee can easily contact players when necessary.

Saturday Ladies – this year a Red Shirt monthly event has been introduced, sponsored by Chris Fletcher.  Congratulations to the winners to date being Kelly Crouch (May), Kay Palmer (June), Wendy Hollis (July) and Judy Blucher (August). Reminder all ladies are welcome to join Saturday Ladies for an extra game if they wish.

Associates Dinner – is Friday 1 December (not Friday 10 November as advertised in the Fixtures Book).  “Colour My World” theme.

Thank you to all who contributed to raising $7200 for the
Perry Cross Spinal Research Foundation.
Wow!
What an amazing achievement girls!! 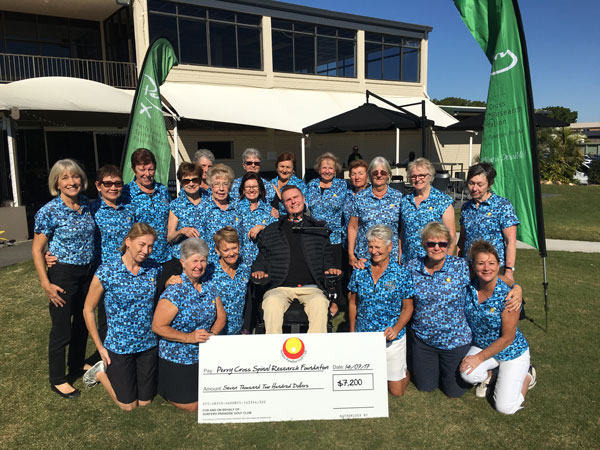 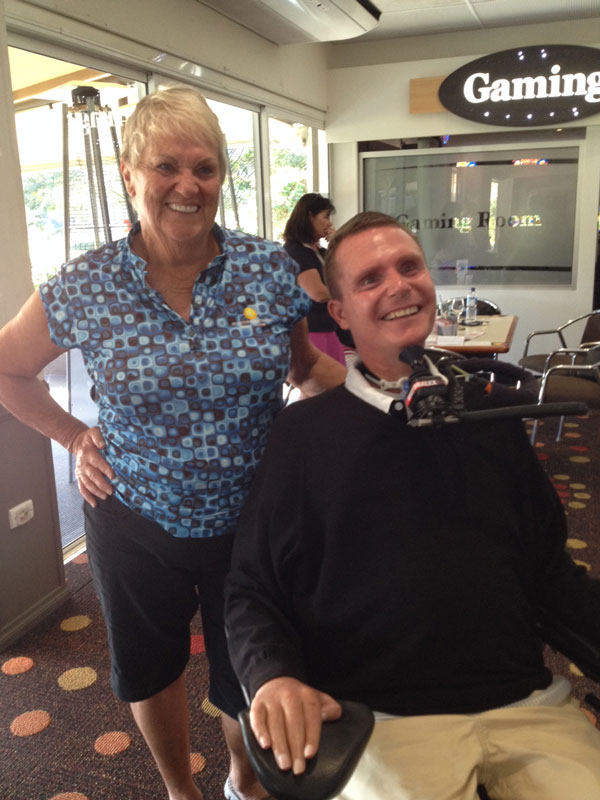 A big thanks to the green staff as the course and greens is looking good. That new electric mower is so quiet it gives the staff the ability to mow early and present the course ready earlier than before.

The eight is coming along nicely with the winter grass improving quickly. Hope to have it back in play sooner rather than later as the temporary green is not handling the traffic very well.

Last saturday was monthly medal and the speed of play was very slow. Look up and look forward. Be aware of your place in the field and if you can’t see the group in front of you, catch up. There was a group that took 4:45 for their round in the morning and another in the afternoon field slow the players down behind them to a 5 hour round.

a 2 shot penalty for each player, even being restricted to playing at the back of the field.

Come on guys!!!! Don’t ruin everybody else’s day by being slow.

And once again, rake the bunkers. I have seen conscientious members who were not even in the bunker rake them as they go past after being left in a mess by previous players.

Because of the over generous drops being taken off the eight tee when behind the safety fence this month’s match and greens committee meeting will be discussing changing the relief to drop zones and you can put money on it that they will be behind a tree. The drop is supposed to be line of sight relief, not out on the fairway. You get relief from the fence, nothing else, especially not the trees.

The new card readers seem to be working well and will even detect if you haven’t signed your card. If your signature is faint it will say that the card is not signed, so just check for the signatures.

We are having problems with the computer online booking system. Members are booking for a group of four even though some of that group won’t be playing, and with some just to block the chance of someone they don’t want to play with coming into their group. This means on Tuesday and Friday the start sheet is full but by the morning there are 30 or more empty spots.

Only a few of these are taken up costing the club money in lost revenue just because you don’t want a particular player in your group. Be aware that this could lead to a membership fee increase for the wrong reasons. Have a good think about what you are doing and the ramifications of blocking tee time

Good luck in the club champs which is just around the corner, get some practise in and I will see you out there.

Our away day at KOORALBYN  is rapidly approaching .
The bus will depart the Surfers Paradise Golf Club car park at 0715
on Tuesday the 12th of September .

The cost for members who have played a minimum of 3 games with All Sports is $ 25 . This includes the bus, the game with cart provided,prizes and a sausage sizzle !

The closing date for entry/payment is Tuesday 5th Sept. Any cancellations after that date may have to forego the fee. Don’t miss out on this very generous offer of a superb away day.

Our thoughts and best wishes go to Les Kentwell, Joe Klasan and BrianGrieve who are presently out of action . A big welcome back to Bob White, Col Harrison and Brian Haylock who have recently rejoined the fold.

Our magnificent course basking in this glorious weather could truly be known as ‘Golfers Paradise.’

Do you know a business or organisation that may be interested in benefiting from one of our new Business Sponsorship Packages?  Our new packages are now available, click image below for all the details. 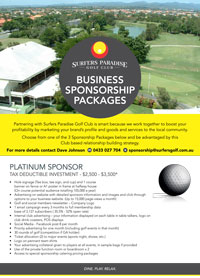 VIEW FROM THE COURSE

It is nearly the time of the year for all golfers to start fine tuning there game in anticipation of The Club Championships. Our course is in great condition with our over sewn Poa Triv greens rolling very well.

I hope all things going well to have the 8th green in play for the first round of the championships on the 2nd of August, it will be a bit of let’s see how the green goes, I have over sewn it with Poa Triv the same as all the other greens but the 328 underneath is not fully covered and could be a bit weak and not handle the heavy traffic, we may play it for just the championships and use 8B during the week, you must remember that this green was stolonised at the end of summer so it hasn’t had any real heat to make it creep.

Our spot spraying of weeds on our fairways has been a success during the winter months, and if you look closely you can see the wintergreen couch coming through the dead weed areas, a good fertilize with a slow release fertiliser in the spring will see our fairways flourish.
Not much more news from Golf Course Maintenance